Open for Applications
We look forward to you joining us for the Confer Talent Institute May 22 - 28, 2023. 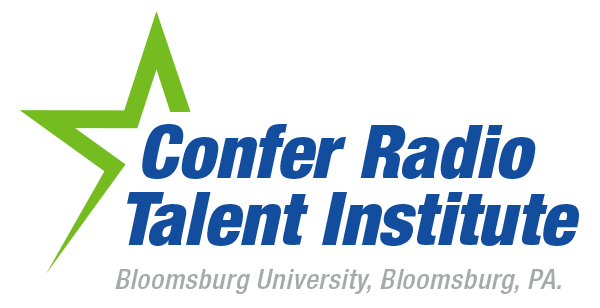 Rocket Boosters for Your Radio Career!

The Confer Radio Talent Institute is a talent incubator at Bloomsburg University of Pennsylvania and is a proud affiliate of the National Radio Talent System. The Institute brings in broadcast professionals from around the country to be the guest professional faculty to teach all the sessions during this intensive summer program.

College students from universities throughout the state and region apply to be accepted into the Confer Radio Talent Institute. Once they complete the Institute, they become part of to the industry and are highlighted for their professional career development.

The National Radio Talent System and the Radio Talent Institute is the campus-to-career connection most students need to begin their broadcast career. It is a connection for broadcasters to discover and hire entry-level talent today that can be the leaders in the broadcast industry tomorrow.

Broadcaster Kerby Confer is the sponsor responsible for making the Confer Radio Talent Institute possible in Pennsylvania. Mr. Confer is a well-known and highly respected broadcaster, having owned and operated over 200 radio stations, and is an inductee into the Pennsylvania Radio Hall of Fame.

"The quality of the broadcasters assembled to teach in this week-long 'radio immersion' is amazing. This is just what our industry needs, and as the digital age is upon us, it couldn't come at a more opportune time. I'm excited to be able to extend the National Radio Talent System to Pennsylvania and the Northeast United States at Bloomsburg University."
- Kerby Confer

Here are some the the Institute highlights (See Curriculum for more)

Yes. You may cancel your registration and request a refund for the Confer Institute at Bloomsburg University by April 1st, 2023

About the Confer Radio Talent Institute

Through the support of legendary broadcaster Kerby Confer, the National Radio Talent System and Bloomsburg University of Pennsylvania are proud to present the Confer Radio Talent Institute, which is committed to discover and prepare a new generation of radio professionals.

Confer, an inductee into the Pennsylvania Radio Hall of Fame, commented,Â “The quality of the mentor teachers assembled for this ten day ‘radio immersion’ is amazing. This is just what the industry needs...it’s important...and the digital age is upon us; this couldn’t come at a more opportune time. I’m excited to be able to extend the National Radio Talent System to Pennsylvania and the Northeast United States at Bloomsburg University.”

Kerby Confer's first job was selling measuring cups and handmade potholders (which he made) door-to-door when he was 9 years old. A resident of Williamsport, PA, Kerby landed his first radio job at the age of 16 working for Galen (Dave) Castlebury at WMPT, Williamsport.

When he was 14 years old, there was the birth of Rock and Roll, and he discovered that when the sun went down, he could hear 50,000-watt clear channel radio stations from all over America. He Â began listening to stations in Buffalo, Chicago and Nashville, hearing all the latest songs. He would start listening around 8:00 PM and sometimes listen until one or two o'clock in the morning.

"By the time I was 15, I was copying down the clever things the DJs would say and was practicing doing it myself. Then, when I was 16, a guy came along and announced he was going to build a third radio station in our town. I showed up the first day and said I would help build the station when I wasn't in school. I said I'd be there seven days a week and wouldn't charge him anything, but when the station went on the air, I wanted a job as a DJ at minimum wage. That was a buck an hour back then. He said, 'Deal.' I helped him for a year. I was a gopher; cleaned the toilets, changed the light bulbs in the tower, and did whatever had to be done. When we went on the air, I was the first voice on the station. I even picked the station's call letters. I was there for a couple of years,Â and then I heard about a job that was open at WCAO. There were 50 guys auditioning for the job, and I drove all night to get down there at eight o'clock in the morning, and by some miracle I got the job. Six months later I was emceeing the Beatles in Baltimore." Those amazing days led to a local TV dance show in Baltimore from 1967 to 1970. "Then, in 1969, I had the biggest break of my life right there in Baltimore. I had been on the radio and TV for about 5 years; I was 29 years old and I'd emceed the Beatles, the Rolling Stones, Iron Butterfly, James Brown, and every soul act you can think of. I didn't want to be 40 and just going through the motions because I had really enjoyed everything I'd done. Then I got a magic phone call.” "A man named Marvin Mervis called me and said, 'Kerby, you don't know me, but I've been watching you on TV and I've heard you on the radio. I own a radio station in Annapolis, MD. My manager has left me; I've had a heart attack and a quadruple bypass, so I can't work anymore. I'd like to talk to you.' “About what?” I asked.” “Somebody told me that your dream is that someday you want to own a radio station”, he said. He was right. Mervis said he thought he could make it happen. He invited Kerby to lunch and made him an offer. "He said, 'If you come down and work for me for a year, and we set the goal, I'm going to teach you how to sell and manage. I'm going to teach you how to administrate the radio station because I can only come in about an hour a day. So you'll come down; you'll be a DJ in the morning, and then you'll go sell commercials all day long. I'll show you how to do it. If you make the goal that we both set - not that I set, but that you and I agree on - I'll cut you in for 10% ownership of the station.' I had to think about that long and hard," Confer said. "There was a famous DJ on the air in Baltimore at the time that was probably on the air for more years in Baltimore than any other DJ. He was the program director at the station I worked, WCAO. He said, “You're quitting to do what?'” "I said, 'I'm quitting because I'm going to be the general manager of a little station in Annapolis.'” “You can't even hear that station up here!” he replied. 'I know,' I said, 'but it's my chance to learn how to run one and the guy's going to cut me in for 10% ownership.' 'Be careful, Kerby,' he said. 'I'm just afraid you're going to become a has-been.' And so it was, I became a has-been DJ."

Nine months later, Confer passed the advertising goal they had set for the entire year and was cut in for the ten percent. Five years later, when Mervis retired and sold the station, Confer walked away with a certified check for $130,000 and bought his own station. "Since then, I've owned a billion dollars’ worth of stations," said Confer. "Bought them broken, fixed them up, and sold them."

Confer formed Keymarket Communications and in the 1980s, initiated dramatic turnaround success with stations around the country, including Mississippi, Louisiana, South Carolina, and here in Pennsylvania. During this era, he created the “Froggy” brand for his country music stations. In the 1990s, Keymarket Communications merged with Sinclair Broadcasting to become the 10th largest radio broadcasters in the United States. Since 1969, Kerby has owned an interest in and operated more than 200 station licenses and is still active in 70 properties. In 1991, Mr. Confer, along with others, purchased WFBG AM/FM in Altoona and formed what is now Forever Media. In 2003, Kerby was inducted into the Pennsylvania Broadcasters Hall of Fame, and he was recently a “Radio” inductee into the 2016 class of the Country Radio Hall of Fame for helping to innovate station branding like “Froggy” as a principal of the Forever and Keymarket groups.

Kerby has long been a leader in civic affairs. He has won numerous community awards and is well known for his charitable and industry work.

The Confer Radio Talent Institute attracts, trains and creates opportunity for talented, enthusiastic and well educated young adults who have a passion for the broadcast industry. College students, recent graduates, grad students, interns and part-timers at radio or TV stations work through an intensive 7-days to bring them to a better understanding of each aspect of the industry, including on-air, programming, writing, news, sports and sales; all students also participate in RAB training and take the exam to earn their Radio marketing Professional Certification.

The Confer Radio Talent Institute prepares the students to excel in entry-level positions upon their graduation, and better ensures they get a start in and have a successful career in broadcasting.

Part of the goal is to prepare students, along with their Liberal Arts education, to the point that they can walk into a professional radio station environment and not only be comfortable, but to excel in every area of the business, from on-air to programming to sales to management ... we expect no less than to prepare a future generation of broadcast leaders.

If you have any questions regarding applying or need assistance in any way, please don't hesitate to contact us directly. 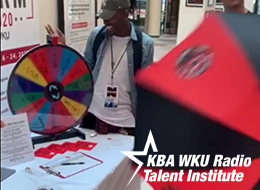 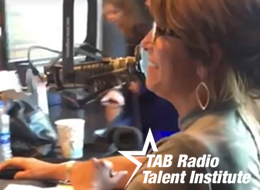 NTRS hangs out with the B97.5 Morning Show. 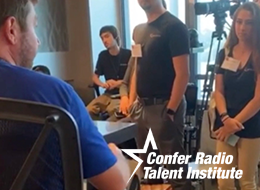 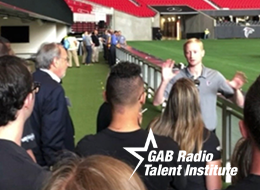 It's GAME DAY for NRTS at Mercedes-Benz Stadium.